Train up a child…

Monday was a Bank (Public) Holiday here in the UK, and for probably the first time in living memory it was actually sunny and… warm!

I took advantage of it by going for a lovely, long walk along a canal in London, listening to podcasts as I walked. After a couple of sermons I turned to Desert Island Discs – a radio programme which asks celebrities to choose which eight records would make their life more bearable if they found themselves stranded on a desert island. The host then chats to them about their life and, perhaps because of the relaxed atmosphere, they often reveal far more than they would in any other interview.

The quote above dates from the appearance on the programme in, I think, 1991, of Jonathan Sacks, shortly after his nomination as Chief Rabbi elect for the UK – a post from which he will soon be retiring.

Sue Lawley, interviewing him, was trying to understand how one holds to moral standards in such a pluralistic society, or rather, how one can hope to hold others to such standards.

They had been talking about Jewish boys marrying outside the faith, and she was asking Jonathan how he would counsel a boy who had fallen in love with a non-Jew.

She then pushed him further, asking “And what if it were your own son, sitting across from you in tears, saying, ‘But Dad, I love her’?”

The above quotation is the answer he gave, gently, quietly, and oh so wisely.

Good parenting, and good moral teaching, is about helping the child not just understand that the laws and boundaries you live by are designed for his or her flourishing, but about helping him or her grow to love and value the rules for him- or herself. Good parents don’t seek to keep their children in line through fear or shame, and neither does a good God.

Jonathan Sacks has brought this same gentle wisdom to the whole of his Chief Rabbinate (if that is the right term!), and I think this picture, taken of him at the Theos annual lecture a couple of years ago sums him up perfectly. 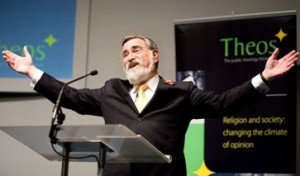 What a lovely man.

Am I Beautiful?
September 13th