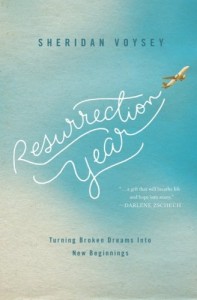 “Books like this usually end with a miracle.” So said one of the potential publishers of Sheridan Voysey’s Resurrection Year. But not everybody’s story ends like that.

Resurrection Year is the story of Sheridan’s and his wife, Merryn’s, infertility and, importantly, their life after the death of their hopes of having a child.

While stories of God’s incredible miracles in giving babies to those for whom it was medically impossible are important and hugely faith-building, stories like this are equally vital.

Sometimes the breakthrough doesn’t happen; the baby isn’t born, the cancer isn’t cured, the marriage doesn’t materialise. What then? Is God only good when he’s granting us our hearts’ desires? What about when he is silent? How do you keep obeying, serving, worshipping, even praising him when he seems indifferent to your pleas?

There is not much detail in this book about how Sheridan and Merryn did that, simply the evidence that they did.

It is instead a book about the courage of a couple daring to dream again, of Sheridan daring to give up his flourishing career in order to let his wife pursue a new dream, of them both leaving behind all they had ever known and starting a new life on the other side of the world.

It’s a book about choosing to continue to trust God and walk with him even when the way ahead is not clear. It’s an honest book, and therefore a painful one in places, and in its honesty it doesn’t really give any answers, because there aren’t really any.

As Tolstoy noted in the opening line of Anna Karenina, “…each unhappy family is unhappy in its own way.” Each person’s valley is unique. The troubles I go through will never be the same as yours, and so the answers we find, the quiet whispers and the newly opened doors we receive from God will never be the same either. But just as it builds faith to hear the miracle stories, it also builds faith – of the persevering kind, not the triumphalistic kind – to hear the stories of God’s faithfulness through the storms.

I read this book because I met Sheridan and Merryn at a friend’s Thanksgiving dinner party. I very much enjoyed their company and, learning that Sheridan was a writer, was eager to read some of his writing (I’d love to hear more about Merryn’s PhD thesis in due course, too, though she was only just beginning to study it, so that may take some time!). I chose this, of the half-dozen titles available, as I felt it was the best way of getting to know them both better.

I always find it hard to rate books when I know the authors. If I like them, I want to be generous, and I really liked Sheridan and Merryn. On the other hand, I want to be fair and honest about the actual book in question, which I fear can make me lean towards harshness (in trying not to show favouritism). And I hate giving half-stars, because that just makes it look as though I couldn’t make up my mind (which I can’t). Maybe I should have started out with a 10-star system to make this easier, but I didn’t.

I’m going to give this book 4.5 stars because I just can’t decide either way. The half-star it loses is because I really would have liked to know more about the wrestling with God and how their faith and their marriage survived when the death of their dreams could so easily have killed either. But maybe they need more distance from the events before they can see that clearly enough. Or maybe it’s just none of my business!

My note-to-self review as I finished reading was ‘A sad but beautiful story, beautifully written.’ And so it is.

Do you suffer from high self-esteem?
October 8th
Review: I Am Malala
January 21st
7 Comments On This Topic